Why sign the Murdoch Royal Commission Petition when it's unlikely any action will be taken by the current Liberal National Coalition Government?

We know the government won't act in good faith on this petition despite it gaining over 360,000 thousand signatures in just over 2 weeks and not closing till 4th November.

What the Murdoch Royal Commission petition has already done is create news in and of itself. Some from the mainstream media in Australia, Murdoch's Sway on Politics warrants a Royal Commission - and also internationally (New York Times & Straits Times) and amongst many of our Independent Media outlets including articles by highly regarded former NewsCorp journalists 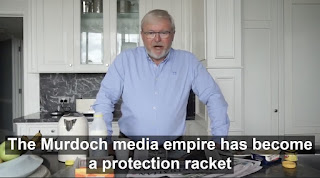 You know that News Corp is no longer interested in reporting facts. It operates like a mafia syndicate with a well-funded protection racket for politicians who back its commercial interests and espouse hard-right ideology on issues like climate change.

You also know that many of Murdoch’s critics, while roaring in private, have been bullied into public silence. They live in fear of joining the mounting number in business, politics and media who have been subjected to an onslaught of lies, innuendo and personal smear. Crikey & here

has NewsCorp evolved into something new, something we don’t have a name for yet, more like a propaganda outlet camouflaged .... weaponising freedom of the press to defend the corporation.

The Murdoch Royal Commission Petition has promoted discussion amongst diverse groups from across the political spectrum from the disinterested to the passionate. Many may not have been aware of News Corp's reach across Australia and the impact this ONE media empire has by owning the bulk of the print media in Australia.

It's created a sense of togetherness against a common adversary. One who's hell bent on undermining not just our society by creating doubt, insecurity & division, but that erodes trust in science, and supports increasingly right wing views:

Rupert and his minions get to reshape the narrative with relentless far-right monotony, drowning out climate science, crushing progress and stomping on compassion. Independent Australia

Is News Corp really that bad?

Eric Beecher a former editor of The Sydney Morning Herald and editor-in-chief of Herald and Weekly Times (owned by News Corp) has this to say:

When I once asked a senior cabinet minister in a recent federal government to explain how media power in Australia operates in the world of politics, this is how he answered: “A cabinet colleague of mine recently told me he’d had a call from [the head of a large media company] who said that one of his editors had put together all this personal information on him, but he was calling the minister just to let him know that he had instructed the editor under no circumstances was the personal information ever to be published.”

That’s how freedom of the press works in Australia, the politician explained, without a hint of joy.

Media power lurks like a prowler in the dark. You can sense its danger, feel its presence, identify its victims. But rarely if ever does it show its full face in the light.

That’s because media power is a weapon built primarily on fear.

The petition helps shine a light on the power, and on the danger it presents to those who stand against it, and how it debases our country.

One voice may seem weak, but banded together, our voices join together and reach others via new media like TikTok 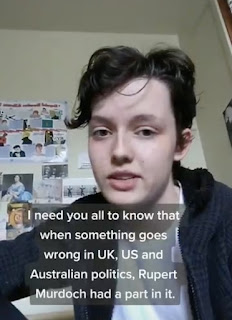 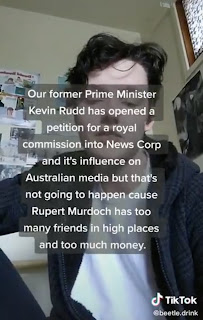 Signing petitions such as the Murdoch Royal Commission - and seeing that others have too helps us feel we are part of something bigger, a group working together to shape and improve our world.

News Corp’s other major markets — the US and the UK — have long moved on. Early last year, The Washington Post’s Margaret Sullivan, speaking of News’ sister organisation Fox, spelled out what has since become the orthodoxy:

… everyone ought to see [Fox] for what it is: not a normal news organisation with inevitable screw-ups, flaws and commercial interests, which sometimes fail to serve the public interest. Instead, it’s a shameless propaganda outfit, which makes billions of dollars a year as it chips away at the core democratic values we ought to hold dear: truth, accountability and the rule of law.

Earlier this year, James Murdoch resigned from the News Corp board citing “disagreements over certain editorial content.” This past weekend, in an interview with The New York Times, he went further talking of hidden agendas and disinformation.

Not surprisingly, News Corp hasn't mentioned that James Murdoch left the board, leaving those who rely on NC in the dark.

This is especially relevant given the reach of News Corp in Australia. Even if you don't purchase any of their media, it's sending messages of disinformation & framing events in favour of their chosen narrative. This is seen at news-stands, servos, supermarket checkouts & cafes. It's next to impossible to avoid.

So, apart from Kevin Rudd, and a few hundred thousand Australians, who else has signed the petition? 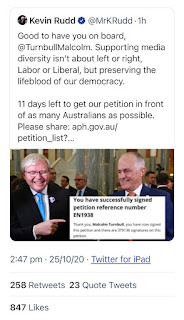 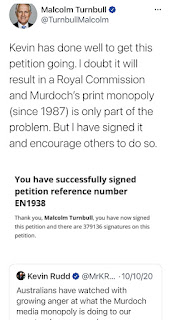 Remember to confirm the link in the email you receive after signing!

Support Independent media (we've got a great variety!) learn about Media Manipulation Tactics and share both the petition and independent media alternatives with community groups.

In Australia the right of petitioning Parliament remains a fundamental right of the citizen. It is the only means by which the individual can directly place grievances before the Parliament.

An important effect of the petitioning process is that Members and the Government are informed, in a formal and public way, of the views of sections of the community on public issues. Even if no action is immediately taken on a petition, it and others like it may assist in the creation of a climate of opinion which can influence or result in action. (my italics)

Is News Corp a news company?

Info from The Lancet about Covid_19.