Separation of church and state? Where has it gone?

Australia's prime minister recently spoke at the Australian Christian Churches convention on the Gold Coast. The content of his sermon is unlikely to be what most people remember from even a vague knowledge of Christianity and definitely NOT what we expect from the Prime Minister of Australia.

It was, in short, a call to the faithful pentecostals to proselytise & convert Australians to their religion while referring to those who use social media as working for the devil.

The PM used a Royal Australian Air Force jet, flying to the Gold Coast in the afternoon and flying back to Sydney in the evening, so it's assumed he was there in his official capacity.

Why does it matter? Aren't all Christian faiths similar?

Kevin Rudd mentioned in an interview on 7:30, there's a vast difference between mainstream Christian beliefs in Social Justice and Environmental Stewardship and the Pentecostal belief in dominionism and that their god rewards his followers with wealth.

-The Prime Minister also talks about his god using Jenny in the political sphere.

-There's a strong Old Testament focus rather than on the New Testament or the Gospels.

-Encourages followers to think that FaceBook is evil, despite using it extensively himself.

Along with some of our Independent Media who have commented on both the content and the lack of, it's also raised the ire of atheists and Christians.

Chrys Stevenson analysed parts of it here on her blog GLADLY, THE CROSS-EYED BEAR

Chrys discusses 3 main points made by the PM:

1. That protection (i.e. social assistance and welfare) should come from ‘community’ not the state, and that those who expect protection from the state are immoral.
2. That groups which coalesce in order to obtain protection from the state are evil and strip their members of their individuality and humanity.
3. That it is not his job to save the world - it is God’s, working through his community of believers.
As you can see these points have the potential to have a huge influence on political focus FROM the Commonwealth supporting citizens in need TO refusing support.
Morrison is in favour of churches providing the role we traditionally expect our government to invest in. "For Morrison, the solution to social problems is to outsource them to God. It’s a typical Morrison “it’s-not-my-job” response. It’s not my job to hold a hose. It’s not my job to fix social problems. It’s not the government’s job to fix social problems."
"for Morrison, people who work in co-operation outside the church to lobby the government to address social inequity are involved in the work of the devil."
Last year as the pandemic unfolded, international students, the arts, child care and other 'outside' groups were denied financial support despite having no employment as a direct result of the pandemic. We can well ask what role his fundamentalist beliefs played in denying assistance to specific groups of citizens in need.

Chrys Stevenson also reminds us that “The ‘prosperity gospel’ reduces religion to a magical technique to advance one’s individual self-interest, ignoring that the Gospel is meant to be ‘good news for the poor’, the Bible’s code for all in distress. The prosperity gospel instead focuses on individual wellbeing, rather than promoting wider concepts of solidarity and social justice in an effort to promote the common good of everyone, but especially of the most disadvantaged or marginalised.”

We see this in the obscene profits and increased wealth of some business (eg Harvey Norman here) who've profited throughout the pandemic. There's NO expectation that funds supplied by the Federal Government will be repaid. This is in contrast to the poorest in society who were hounded by Robodebt, sometimes to death. 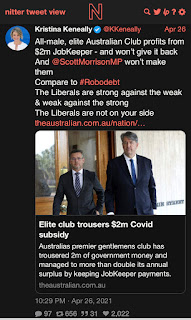 It's worth noting how the fundamentalist churches benefit from providing 'services' to citizens when the government channels $$$ to them. "when the poor and disadvantaged become dependent on the church, the church gets the big government grants and the power that goes with that. "

He then outlined engaging in the Pentecostal practice of “laying on of hands” by praying for people at disaster centres by touching them.

“I’ve been in evacuation centres where people thought I was just giving someone a hug, and I was praying, and putting my hands on people … laying hands on them and praying in various situations,” he said. 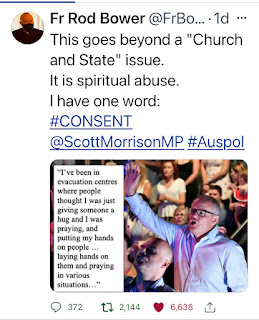 I wonder how the people who declined to shake hands with him at Cobargo during the bushfires feel about him forcing himself on them now they know his intent? 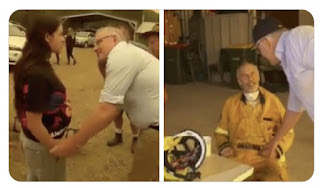 for those outside the church, the speech gives us a kind of guide to Morrison’s real worldview, the beliefs he deeply holds about life, morality and faith when he isn’t performing for the cameras.

“He’s saying, unless you’re a Christian and have your faith in Christ, you’re being used by the evil one. That’s his worldview,” McSkimming said.

“This worldview is: we’re going to heaven, and you’re not.”

These are the PM's beliefs. Are they Australia's?

Further commentary fails to settle the discomfort of having a prime minister preaching divisive ideology:

Christianity has this funny polarity where looking outward is almost always an outpouring of the gospel message. It's selfless. It's compassionate. It's gracious and humble. Conservatism in Christianity is a very inward-looking...phenomenon that relies on boundaries of exclusion to keep the unclean or uninitiated out.

...Pentecostals rely on the Old Testament more than the New Testament for their approach to Christianity so much so that I don't think they have actually *read* the gospels. Morrison's reliance on a hardline conservative author to put his points forward?
His whole point for the next ten minutes is about pushing his fellow Christians toward building communities based on morality... the same rigid morality and...adherence to it that the temple priests imposed on the community, the same rigid morality that... funnily enough... Jesus was fucking livid over. 8 min: "we can't let what we're entitled to be more important than what we're responsible for" This gives a hint to his moral justifications for things like asylum seekers and robodebt: for Morrison, [his version of] morality overrides rights. Morality overrides human rights.
Continued here: Part 2:
Groups of people such as #March4Justice, working towards a common goal, and outside those deemed moral by the ACC, and are considered a threat to their conservative ideology.
He WANTS Australians to be dragged into a more religious, conservative morality with him as the Chosen One, and implores attendees to assist. To underline the religious message, the Murdoch Media presented this headline and visual as reinforcement. Discussed here: 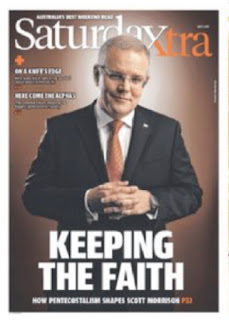 What steals young people's hope?
The New Daily discusses the PM's attitude to social media, and refers to the weapons used there by "the evil one" (aka the devil).
“It’s going to take our young people. It’s going to take their courage. It’s going to take their hope. It’s going to steal their hope. We’ve got to pray about that.”
Curiously the PM is enthusiastic for people to join his religious pack, but sees other groups as evil.
What really steals hope? Lack of action on climate change, lack of investment in education (primary, secondary & tertiary), lack of support when they're job hunting. Lack of Federal investment in services & community housing. ALL eroded since the LNP came to power.
Which faith?
understanding Morrison’s faith is most definitely in the public interest, because faith burns at the core of the man, and fellow believers also assign considerable value and significance to his prime ministership.
When Morrison became Liberal leader, some pastors told congregations his elevation to power was divinely inspired. Ahead of the 2019 election, some Pentecostal leaders warned “darkness” would spread across Australia and Christians would be persecuted if Morrison lost. At his final speech at the National Press Club before the election, Morrison told voters he would “burn for you every day” if he won. After the victory, he told voters he had always believed in miracles. Link

And the final words from Tim Dunlop here

They are doing this stuff on purpose.The agenda is not a 'better country for all' but a country rebuilt in their own image, which is increasingly right wing, evangelical, white, ungenerous in a Randian individualist way, bland, and, of course, patriarchal.

Further reading:
Kevin Rudd
7 Mountains mandate here & here
Influence on Government here & here
"those in the New Apostolic Reformation pride themselves in not being bound by rule or regulation. Their message is about freedom from man’s rules, expectations and opinions. Nevertheless, Apostolic Centres (as they are also called) like Hillsong, see it as their mandate to ‘infiltrate’ and take over governments to influence culture. " Social Media & the devil here here & here
Indigenous beliefs seen as the work of the devil here
Conservative Christian values and sex here & here
And there's more:
https://theconversation.com/explainer-what-is-pentecostalism-and-how-might-it-influence-scott-morrisons-politics-103530
https://theconversation.com/five-aspects-of-pentecostalism-that-shed-light-on-scott-morrisons-politics-117511
https://www.sbs.com.au/news/scott-morrison-opens-up-about-his-faith-says-we-should-pray-more
https://overland.org.au/2019/06/why-i-fear-scott-morrisons-pentecostalism/
https://theaimn.com/the-mates-in-faith-that-scott-morrison-admires/
https://www.themonthly.com.au/issue/2019/february/1548939600/james-boyce/devil-and-scott-morrison#mtr
http://churchandstate.org.uk/2017/05/has-evangelical-christianity-become-sociopathic/?fbclid=IwAR2X7TbG5UFZN2q4rYTfswnLp1D3CgkX47mcsii53UBi8wZ7Qpbk3oBx6dc
https://cstroop.com/2018/06/14/escape-from-jesus-land-on-recognizing-evangelical-abuse-and-finding-the-strength-to-reject-the-faith-of-our-fathers/?fbclid=IwAR3f6OHIpt1bHEINmBrL0UtwwP3lkhzH7VtZ5H_1C6CGsB9SWG8tyhHhPMs