Eight hefty rorts not covered by Australia's mainstream media. Why the silence?

I have wanted to express this for the last three days. Here goes.

I am disgusted at the lack of Integrity and the dishonesty of the Main-Stream Media in Australia. Because they have been nobbled by the Coalition generally. This week they have been discussing Labor Branch stacking Ad infinitum in Victoria. Branch Stacking is NOT an offence. It is a manipulation of the Internal Labor Party rules.

What might be an offence is the fools of MP's who used employees on the public payroll to do this manipulation. I agree that that needs to be addressed. If those  MP's have committed offenses against State or Federal laws, then they should rightly suffer the consequences.

The press have been spending an inordinate amount of time discussing this this week, YET they have totally ignored another outrage perpetrated by the sitting Federal Coalition Government.

The reporting of the rorting of the latest round of the BUILDING THE BETTER REGIONS FUND ROUND 5. This was reported in the Guardian and The New Daily within days of it being released. I was one of the people who analysed it.

One: Here is a graph of the uneven distribution of the funds:

I cannot understand how this is not Newsworthy, especially in light of the following other analyses done and hardly reported by the press. 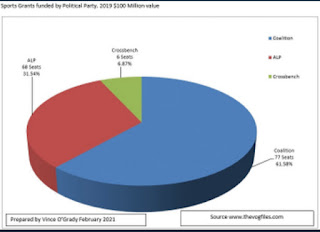 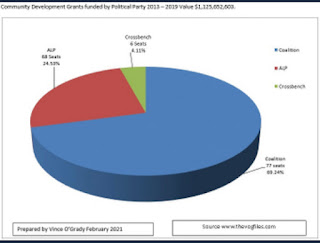 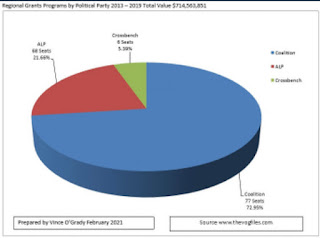 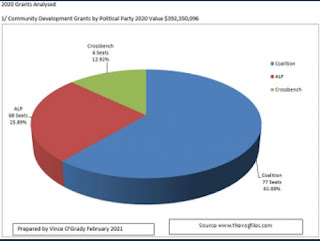 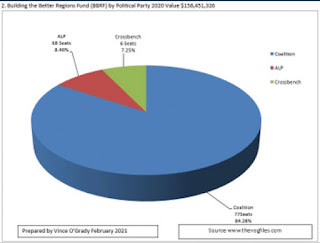 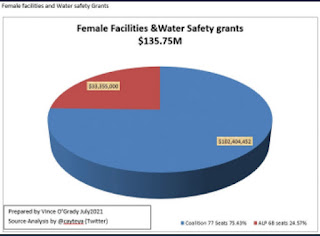 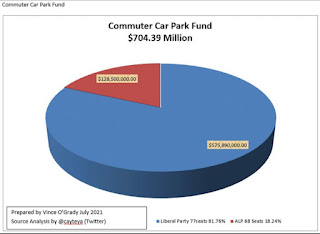 You'd expect so, but not covered by the bulk of Australia's media.

Who benefits from the lack of analysis and coverage?

Is the above pattern of funding in the spirit of the Australian "Fair Go"?

How can we make informed decisions about who to vote for if we don't have relevant information?

Read and subscribe to some of our excellent Independent Media!

Does your political rep vote the way they say they do? Or is what's presented in gushing enthusiasm a ruse to get your vote? How do they vote on: Vaccines, Aged Care, Education, Financial support during covid, water & food security, foreign ownership to name a few?

Is your vote being used as YOU want it to be? https://theyvoteforyou.org.au/

Posted by Sue No comments:

Media Manipulation & gaslighting. Why would a media org run articles with opposing views on the same day? 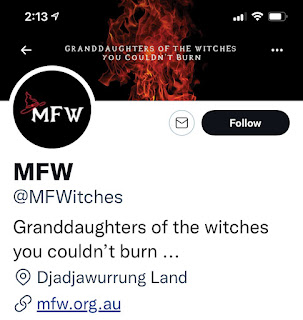 A. Based on a tweet this morning (September 10, 2021) about why a media organisation would run 2 pieces today with completely opposite points of view on lockdowns, here’s a thread about why they do this.It’s absolutely crucial to understand this if we want to demand (and get) better media in AUS. 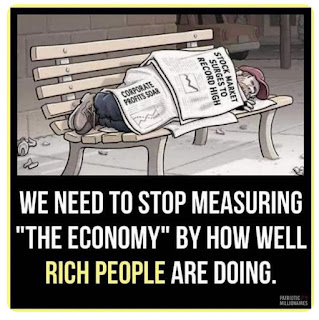 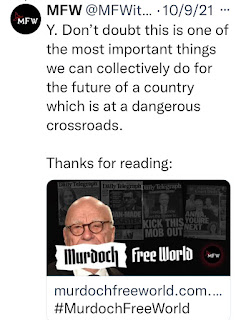 Posted by Sue No comments:

Vaccines aren't the silver bullet against Covid-19. So what is? Do All The Things!

Thread as follows was shared Aug 28 2021 on Twitter by https://twitter.com/YouAreLobbyLud and is reproduced with permission.
Read on, it's important! Really important. 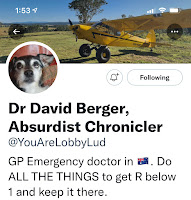 1/ HOW TO LIVE WITHOUT COVID-19: A PRIMER The maddening thing about our (the world's) situation is that the tools to live without COVID are all readily available and technologically simple to implement. Read on to see how we can (and must) LIVE WITHOUT COVID...
2/ VACCINES These are incredibly effective at preventing the most severe illness and death, much less so at preventing infection and transmission. But look, we haven't even had them for a year. They are an extraordinary scientific and technological achievement.
3/ They will be refined and developed in years to come and there is no reason to believe we will not eventually develop sterilising vaccines that will reduce transmission and have the potential to lead to herd immunity.
4/ But we are not there yet and that means vaccines are not yet the "silver bullet" we all hoped for and which many are (dishonestly) spruiking (sorry non-Aussies, there is no substitute for this excellent word).
5/ WHY IS "VACCINES AS A SILVER BULLET" SO DANGEROUS TODAY? 1. Large numbers remain unvaccinated, especially kids, for whom infection is very non-trivial. 2. Infection, even when vaccinated, carries consequences, especially the unknown, long-term effects of long covid.
6/ 3. Allowing rampant transmission of the virus within a vaccinated population selects for VACCINE-RESISTANT VARIANTS, potentially putting us back to square one. EVOLUTION. Charles Darwin, Huxley, Wallace et al: all the rage amongst the scientifically literate, don't you know?
7/ We need to face reality: Westerners vaccinated with the current vaccines will not walk amongst the virus like superbeings, immune to the ravages it inflicts on the lesser mortals in their own and other countries, with life going back to 2019 "normal". AIN'T. GONNA. HAPPEN.
8/ Luckily, there are quite a few other things we can do, IF WE ONLY DECIDE WE WISH TO. We need to simplify the strategic aim to this concept: "DO ANY AND ALL THE THINGS - VACCINES PLUS - TO KEEP R BELOW 1".
9/ If R, the (effective) Reproductive Number, is kept below 1, then the virus is in exponential decline and will eventually reach a state of zero transmission: #ZeroCovid. If R is greater than 1, the virus will continue to grow exponentially.
10/ The vaccines help to bring R down, but the current generation of vaccines does not do so nearly enough, so we need to do other things as well. What kinds of other things? Well, you know cholera? And how it's a really nasty, diarrhoeal illness which can kill within hours?
11/ This is what cholera vaccines look like and they are good(ish) , but not good enough. Cholera was not eliminated as a public health threat in most of the world through vaccination, but through improving water quality and sewage treatment. 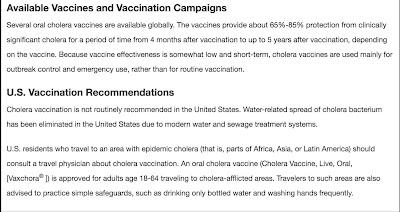 12/ https://historyofvaccines.org/content/articles/cholera…\...\See where it says "Water-related spread of cholera bacterium has been eliminated in the United States due to modern water and sewage treatment systems"? We need to do the same kind of thing for COVID, and we can.
13/ Where we treated water for cholera, we now need to treat air for COVID. It is in the air, it is highly infectious, it floats long distances. I'm not even going to bother linking to articles about this. IT IS NOW SETTLED SCIENCE.
14/ So as we wait for even more magical vaccines to be developed - and while we humans may have a vicious evil streak, we are also very, very smart and cunning and so they will arrive eventually - we need to turn all our attention to purifying the air we all share.
15/ Because it turns out the air we breathe is the equivalent of the water we used to drink in Europe in the first half of the nineteenth century. In other words, it's FULL OF SHIT. But we know what to do to get rid of the shit and it turns out it is very, very simple:
16/ IMPROVE VENTILATION. And, where we can't improve ventilation, FILTER the viral (and other) aerosols out of the indoor air with mechanical filters and N95 or greater masks. 😷Purifying the air we share is no less important to our health than purifying the water we drink.
17/ The only difference is that we do not understand the importance to our health of clean air in the way we do of clean water. This is simply ignorance and it must change quickly.
18/ EDUCATION We must educate the world's population about the importance of clean air and the many simple measures - avoiding crowding, opening windows - which can get us a large part of the way to breathing and sharing clean air.
19/ VENTILATION We need to set global indoor CO2 standards and we need to invest massively in infrastructure and technology to reach those standards.
20/ FILTRATION Mechanical filtration of the air we share is going to be a critical part of our future, especially in high risk environments such as hospitals. And then the other kind of filtration: masks.
21/ We are now 18 months on and N95 or above masking needs to be standard in the community. We need to get over the inhibitions we have and recognise that, for the moment at least, masking is here to stay.
22/ MOVEMENT RESTRICTIONS aka "Lockdowns". These are a necessary part of the arsenal to get R below 1 when necessary, but it is critical to realise that they are only needed as an emergency if the above measures fail.
23/ They are a sign that we have not been doing enough to ensure we are sharing clean air.
24/ By doing all of these things, "ANY AND ALL THE THINGS - VACCINES PLUS - TO KEEP R BELOW 1", then we will be able to "LIVE WITHOUT COVID". We will be able to eliminate COVID, get to #ZeroCovid. That doesn't mean COVID won't exist.
25/ It will just mean that we keep it under control, which, like cholera, means stamping on it when it breaks out to get it back to zero. And stamping on it using measures over and above vaccination.
26/ But isn't all this so terribly expensive and, frankly, a major hassle? Yes, it is, but the alternative of "living WITH COVID" is far, far worse. And come on people, look what we have done already.
27/ We are an incredible species that has transformed the face of the planet (for better or worse - we're not going there right now, luvvies). We SENT PEOPLE TO THE MOON IN THE 1960s. We carried out the D-DAY landings, the greatest, most mind-bending logistical feat in history.
28/ CLEANING THE AIR WE SHARE, like we cleaned the water we drink, is small fry compared to almost everything else we have ever achieved.
29/ So why aren't we doing it?
30/ Why are there so many voices trying to argue for a future of "LIVING WITH COVID" when all around the world we can see what a catastrophe it already is and when we know that will be nothing compared to the catastrophe of creating vaccine-resistant variants through allowing rampant transmission?
31/ Well, there are a few reasons, including:
Poverty of aspiration Poor reasoning ability Ultra short-term thinking Malign neo-liberal economic interests Failure to understand basic scientific concepts Active disinformation
32/ We simply cannot sacrifice all our futures to these kinds of nihilistic, and frankly psychopathic, influences. We need to understand the nature of the threat we face and put all our energies into the conceptually simple process of CLEANING THE SHIT 💩 OUT OF THE AIR WE BREATHE
33/ ...as we once had to clean the shit out of the water we drink. And as we deal with this threat to humanity we must also deal with that other, much larger threat: climate change.
34/ All of the thinking which applies to the threat from COVID applies to the threat from climate change. So maybe, in the end, the COVID-19 pandemic will turn out to be the thing which awakens us from our slumber and gets us to work together rationally to save all our futures.