This thread was compiled by Sam Connor (Twitter: https://twitter.com/criprights) and is reproduced here with permission.

It's an ordinary thread, about ordinary people, chatting in an ordinary waiting room after managing to receive their booster injections during these extra-ordinary times.

Yesterday I received a booster shot. I was at the doctors and he said if I came back in the afternoon about an hour after they started jabs, I’d almost certainly score a cancelled appointment. I was with five others, all elderly. We spent the next fifteen minutes together.

Fifteen minutes with a stranger is a long time. After the nurse gave us our boosters, we waited in chairs, lined up in the clinic. Three older women, two older men. As you do when thrust together, we began talking.

The woman with the walking frame was Deaf and her companion was mad because she kept having to shout. Finally in exasperation she said, don’t you have your hearing aid on, Sylvia? ‘What?’ Sylvia bellowed at her. Eventually she understood. ‘I can’t hear through these masks!’

My mother was Deaf. I said there were masks with clear panels - she was clearly a lip reader. Her companion pointed to her own ear. ‘I have a cochlear implant,’ she told me. ‘When they turned it on for the first time…’ She must have been at least 70. Her grin was dazzling.

One of the men was impatient. ‘Do you have a watch?’ he asked me. ‘I have a phone.’ He looked unimpressed, because he didn’t ask for a phone. I told him I would tell him when time was up. Small talk, they used to call it. Nothing important, nothing deep. Just talk.

Sylvia’s companion told me that Sylvia had a cousin who lives in Toodyay. Sheila, her name is. She likes horses, she told me. ‘Do you know her?’ she asked. Perhaps by face, I told her. Mostly a lie. I don’t recognise people by their face. I don’t know if I know Sheila.

Sheila was my mother’s name. I wondered how many children and grandchildren these people had between them - how many jobs they had held, how many houses they had built, beds they’d laid in and loved in. I wondered what that hole in the world would look like if they left it.

Small talk. I remember all the words, but nothing really was said. A cousin called Sheila who liked horses, masks with clear windows. A minute to go, I told the impatient man. He got up immediately. ‘Not yet, not yet!’ said Sylvia gaily. He smiled at her, left.

thought about we people who are considered disposable, expendable. If they’d gone to war for their country or brought up someone else’s children or volunteered their whole life long.
Small talk, but an enormous loss to the world if taken before their time. And yes, they were old, and yes, many have lived their lives - but preventable deaths are NOT ‘God’s will’. If you believe in a God, you also believe He gave you the ability to make others safe.
Not make others rich. I wonder what Sylvia would have thought of our PM, with his Humpty Doo barramundi from a fish farm who had more than thirty million in grant funding. I wondered if she’d know him if she saw him in the street. If she knew he sees her as collateral damage.
Small talk but a gaping hole in the world when any one of us leaves, regardless of age, fitness, disability or race. Those people, combined, have paid more taxes in their lives than Scott Morrison ever earned, I’ll bet. And now, apparently, they are regarded as less than.
I am tired of us being regarded as Minus People. We are worth as much as any other Australian. And I reject the idea we should not be treated as human. We have the right to be treated fairly and equitably BECAUSE we are human. That’s why they call them human rights.
This tweet doesn’t say anything much. It’s like small talk. But I wish I could carve out those few minutes and stitch them together like a quilt, as a reminder of the worth of humans, humanity. I wish I could wear it like a priceless cape that nobody would ever want to buy. 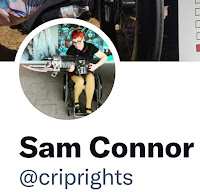