Is a great author a friend or foe?

I have a beef with Sir Terry Pratchett. A bone to pick. A complaint to make… allbeit extremely respectfully; he is pretty famous after all, and has friends in high places. 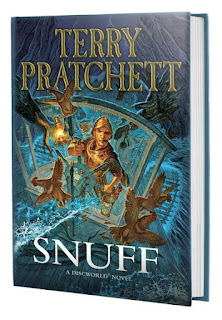 I received an Amazon gift voucher for Christmas. I knew there was a new Pratchett out and everyone expected me to spend said voucher right then and there. But I’m not like that, I like to savour the anticipation, to get double the value as it were, from a gift voucher…

b) the actual reading of said book written by the master-craftsman.

I stretched it pretty well! Writing 26 posts in April for the A-Z blogging challenge about Climate and sustainability had a lot going for it. It would have been far too distracting having a new Pratchett breathing down my neck begging, nay, demanding to be read.

Heading off on holiday in May seemed the right time to redeem the voucher. It hadn’t been lost, used as fire starter, been recycled or gone into the compost – always a good beginning!

There was enough on the voucher for 3 good e-books. Electronic reading is great where space is at a premium; a library condensed into such a convenient package . The ability to read tucked into a sleeping bag with only one hand exposed to the chilly night air in a flimsy tent is sheer magic. Little light curved so perfectly to illuminate the page, and the sound of my chuckles are dampened by the downy deep sleeping bag. Best not to annoy a snoozing partner!

But now, here’s the REAL gripe. It’s only possible to read a Pratchett once, for the first time,  ever.

Think about it, and that statement isn’t as loopy as it sounds on first reading, no matter how poorly it’s phrased.

There’s only that once when you don’t have any idea what's going to happen, which characters will reappear and what their relationship will be with each other and the plot. That’s NOT FAIR.

I’m like a child at a fair, gorging herself on all kinds of sweets, hotdogs, fairyfloss and doughnuts, not slowing down to chew properly or really notice what’s happening. When I’m immersed in the story, I think there could be a major storm crackling and raging and dumping torrents of water and hail outside the tent and I wouldn’t notice till the whole thing blows down around me.

Of course the second reading is wonderful. There is delight in slowing down, catching the nuances, the aspects that in the first excited reading had been grabbed greedily and gulped without chewing as it were.

There’s the “Ah, yes, I remember that now” and the “How on earth did I miss that gem” and the “Oh ho! There’s the clue so sneakily inserted in amongst the delightful distractions. The clue that’s so vitally important for the drama later on.”

The third and subsequent readings all have their joys, not to be ignored or overlooked. The books and characters become friends, loved for all their foibles and idiosyncrasies. You know how they'll react to the situations they’re placed in, it's wonderful, but it's not the same as the first not knowing.

But I’m getting ahead of myself. I haven’t finished the book yet. I've finished the other two more academic books redeemed from the gift voucher - both good! and now I’m at the stage of exploring and using all the delaying tactics known to man and woman to avoid the time when I know how Snuff evolves. What’s the expression – bittersweet?

I try, really I do, to ration myself to just a few pages each night, but time ticks away, my arm aches and my hand is bitterly cold, I've read more than my ration :(

I let my Kindle run down. I try to reread sections, to backtrack, to slow down and savour the moment, but they’re too damn good. IT'S NOT FAIR!

I’ll allow myself another page AFTER I’ve done the chores. I’ll just knit another row, then I’ll have a peek at what’s happening. I try so hard to stop and remember other characters, and situations - where and when this character was introduced, what happened and why. I indulge in flights of fancy: will Death appear, or Esk nod wisely from a corner?

And the themes are wonderful. Good and bad and the complexities therein, deeply nuanced with layers of shades of grey. Justice, compassion, grief, anger, ethics, values, integrity and worth – so human, such deep understanding of the beauty and pain of existence.

Sir Terry Pratchett is a master craftsman, and while part of me rages against the unfairness of life and his illness, I’m so grateful for his wisdom and compassion and his continued ability to share all that with us ... and I finish Snuff with a contented sigh.

Hi Sue .. poor old Sir Terry - I think part if not all of the royalties of his books goes towards medical research ...

However - just to shock you - I've never got to grips with STP .. and must obviously have another go ..

I will - I can hear everyone in the blogosphere having apoplexy at my inability to connect with him ..

Hilary, my brother thought we were decidedly odd when we used to talk about the Discworld novels. He insisted they were a load of rubbish with nothing interesting to say. We failed to get him interested. Then after years of chatting with assorted guests at the dinner-table about characters and plots, he tried again, and now thoroughly enjoys them. They're certainly not to everyone's taste, but for me they're a delight.

I enjoyed reading Snuff very much but i am not looking forward to the time when Sir Terry Pratchett's illness becomes apparent in his writing.

I love discworld and Terry Pratchett's books :)I often wish I could write as "Funnily" as he does:)
Nutschell
www.thewritingnut.com

I am glad someone else feels the same excitement about any new book from Sir Terry Pratchett that I do. I spent my whole college ploughing through every discworld novel I could lay my hands on. I haven't had time to read Snuff yet, sadly, but I anticipate whenever the change does arise!

D.J.Kirkby, My hope is that there is some sort of 'tandem' writing so that there is no evidence of his illness. Although that seems so selfish. I'm going to miss the joy of discovery and knowing how things work out for different characters. Thanks for stopping by, and my apologies for missing your comment.

nutschell, I couldn't agree more! I try too hard, and it simply doesn't work. I'm sorry I missed your comment earlier.

SolariC. The discworld novels are a saving grace for many people I think. I can fully understand their sanity saving effects when you were studying! Snuff is great (naturally) - when you've read it, drop by and share your thoughts if you can.

If you're on G+ there's someone (some people?) with the name "Terry Pratchett Patchwork Places" who are well worth having in your circles :-)